The Briggs Raptor was was first made in 1991 as the Raptor I. This was only three horsepower.

The Raptor II was an upgrade to four horsepower, and some other modifications to improve engine life.

Then came the Raptor III. This was a five horsepower racing engine. This was the best selling race engine of all time. These are still being raced all over, even with the Briggs Animal taking over a lot of racing events. Most places will list this engine class as "Briggs Flathead" or "Briggs Stock". It varies from place to place.

The WKA(World Karting Association) still runs these but in much fewer classes now that they mostly race Animals. They tried for a while to race them together but the Briggs Animal was an advantage and were dominating all the classes.

Once it is "blueprinted" (term for being tuned and modified by Race Engine Builders to the most the rules allow) they can put out about 10 HP. 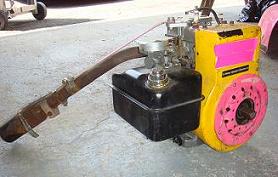 The raptor is a flathead engine, meaning the head of the engine where the valves are, are flat.

As you can see here, the fuel tank is attached to the motor. Most newer engines (like the animal) have the fuel tank between the legs of the driver on the floor pan.

The carburetor is on top of the fuel tank, and connects to the block, and transfers the fuel, and mixes it with air for the combustion inside the head by the spark plug.

A curved pipe helps with the air flow exiting the engine, and with performance. The muffler on the end is required by most places to keep noise down.

From the back you have a better view of the head.

The shaft sticking out is where the clutch goes that connects the engines with a chain to the rear axle.

The yellow cap at the bottom on both sides are where you put oil into the engine. Since the engine is mounted when you are working on it most likely, the oil cap in the rear is the easiest to use.

The Animal Engine runs on Methanol, like most other Race Kart Engines. It's a safer fuel to use than gasoline, it doesn't "explode" when caught on fire like gasoline.

They use synthetic oil that comes in various colors. Usually the colors dictate what type of oil it is. Your engine builder usually lets you know what to use.

To stay competitive, the Raptor can go through a few rebuilds a year. The newer Animal is better in that you only have to rebuilt it once per year usually. Overall it ends up being cheaper running the Animal. But there are so many Raptors out there, people have to use them all up!

There have been a few variations of the Briggs Raptor over the years. The Controlled Stock was one, where basically the biggest change was the carburetor was bored out more to a larger opening, thus allowing more of the fuel/air mixture to get into the engine, making it faster.

Another variation was the Super Stock. This allowed more modifications to the engine, and the use of a Tillotson Carburetor. This produced a faster engine.

The fastest variation, other than a true open class(anything goes), is the Briggs Raptor limited modified. This used the Tillotson, and allowed a lot of modifications to the engine, including billet rods, open valves, and more modifications made to the block. These probably produced almost twice the horsepower of a regular blueprinted Raptor.

Every place may have a different name, and variation of engine. It's best to call local tracks and find out. I(and most other kart racers) would like for one day that all tracks and organizations use uniformed naming standards for classes and engine types, to make things easier for new racers that are not in the racing scene.

Back to Kart Engines from Briggs Raptor

Back to Karting Home from Briggs Raptor