Superkart: The fastest in the world

The superkart is a really fast kart raced only by kart racers that are adults and have some experience. 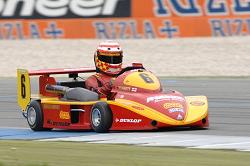 Superkarts have full aerodynamic bodies with a rear wing and are built on a straight chassis. These karts are designed for road course tracks.

The engines can vary but most of them use a 250cc engine of some sort. These come from motorcycles usually, and they are shifter engines.

Tracks they race on

Superkarts race on large tracks that cars race on as well. On some tracks they hold the laptime record, and others they are on par with formula 3 lap times.

These karts achieve speeds of over 160mph, and have one of the highest power to weight ratios of all motorsports.

Back to Racing Karts from Superkart

Back to Karting Home from Superkart